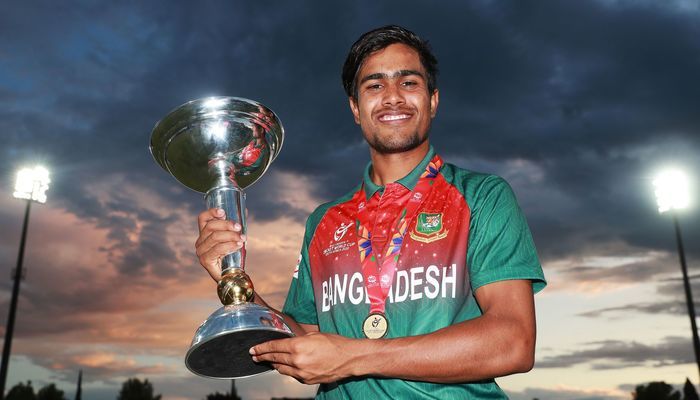 Bangladesh captain Akbar Ali scored 69 runs with an average of 69.00 featuring not out 43 runs with six dismissals in the six matches.

Akbar didn't need to do much with the bat before the final, but when the onus was on him, he delivered, and how. His captaincy and wicket-keeping had been impressive already, and in the final against India, with his team in a hole at 65 for 4, Ali showed the way and led Bangladesh to the title with an unbeaten 43.

Joy really made it count in the semi-final against New Zealand, where his 100 took Bangladesh to their maiden final, which they went on to win. Quite often, he played the role of the anchor, holding the middle-order together, after starting the tournament slowly.

Five 50-plus scores in the tournament - including a hundred in India's semi-final win over Pakistan - Jaiswal was by far the most consistent batsman going around. He displayed a solid defense and showed that he becomes more and more fluent the longer he stays in the middle. As a useful add-on, he can bowl a few quick overs too.

The 73* against South Africa in the seventh-place playoff was his best innings, but even outside of it, the Afghanistan Test opener was the rock that almost always led the way in giving the bowlers something to play with. Afghanistan was at their best when Zadran batted long and became the pivot around which the others did their stuff.

Kumar finished joint second on the list of highest wicket-takers, his medium-pace bowling accounting for 16 wickets, but he was also Canada's dependable top-order batsman. In the tournament's official fantasy cricket system, he had the most points entering the final, before being overtaken by Jaiswal and Ravi Bishnoi. His four-for rocked South Africa in the group stage while his three-for created a flutter in Zimbabwe ranks in the playoffs, and his 3 for 37 and 37 with the bat helped Canada finish 13th with a win over UAE.

The team's floater, Mousley first struck a 44-ball 51 from No. 7 against Australia, in a game they lost in a thrilling finish. He then opened the batting against Sri Lanka in the Plate final and scored a fluent 111. In between, he crunched a 36-ball 57 against Japan. If he had opened from the start of the tournament, England's tournament might have been different.

Two Player-of-the-Match awards in two tough group games made everyone sit up and take notice of Young. Against Australia, the allrounder struck a patient 61 during a testing period to win his team a close game. Then, against England, he hammered a quick 66, leaving a few windows broken in Kimberley while doing so, and followed it up with 5 for 45 - perhaps the best all-around effort of the competition. He played a big role in his team staying unbeaten all the way to the quarter-finals, where they lost.

Clarke took seven wickets in four games, including a four-for against West Indies in the quarter-final, but what he did with the bat in that game stood out more. His unbeaten 46* from No. 10 rescued New Zealand from certain defeat as they eked out a two-wicket win. Earlier, in what was a crucial group-stage game against Sri Lanka, he was the man of the moment again, hitting a six in the final over to knock their opponents out.

Ten of his 16 wickets came against one team. In the tournament opener, Ghafari lit up the stage with 4 for 15 to defeat South Africa. After that, South Africa won every game, until they met Afghanistan in the seventh-place playoff. There he ran through South Africa again, conceding 15 runs again but this time for six wickets. In between, his 5 for 23 floored UAE in the group stage.

The tournament's highest wicket-taker with 17 strikes, and a close contender for Player of the Tournament, Bishnoi certainly made a big splash. Even if you take the legspinner's 4 for 5 against Japan out of the equation, every time he came into bowl, you felt a wicket was around the corner. Importantly, he did well in high-pressure matches: four crucial wickets in the middle overs against New Zealand to help India finish group toppers, 2 for 46 in the win over Pakistan in the semi-final, and then when he nearly won India the final with 4 for 30 against Bangladesh. In between, there was the crucial 30 with the bat against Australia in the quarter-final.

Tyagi was among the wickets in each India game except the final, when he was wayward. But, whenever he had the ball in his hands, you had to save your toes because his yorkers were so accurate. One of the tournament's fastest bowlers - he hurt Japan with 3 for 10 and was on the money against Pakistan in the semi-final where he collected two important wickets for only 32 runs. But he will remember the Australia game the best - his three wickets in his first two overs pretty much set up India's victory.