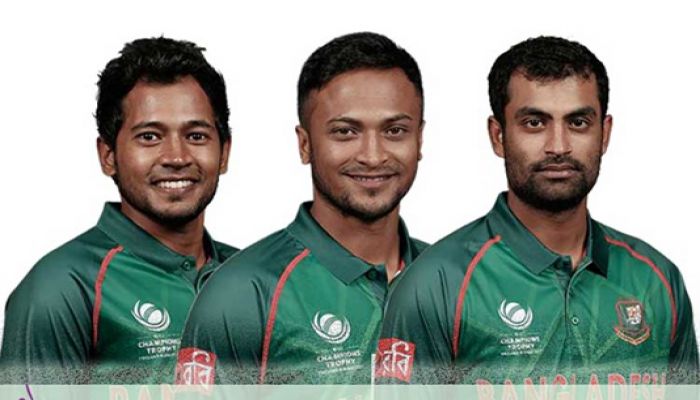 In an online interview with Cricbuzz, Shakib also revealed a healthy competition between him and the do and called it good for the cause of the team.

“There is a healthy completion among us which, I think, is good for the team,” Shakib said.

“You always need those rivalries among the players for the betterment of the team. So if someone is scoring a 100 you need to score a 120. That’s the rivalry we have,’ the ace all-rounder added.

However, Shakib, Tamim and Mushfiqur had joined the International cricket almost at the same moment. The trio also shot in the spotlight at the same time during the 2007 World Cup.

Until then, they founded them as the stalwarts of the Bangladesh team and led several unforgettable victories to the hand.

Shakib, who is actually staying with his family in the USA, said that the perfect opportunity will be for the three of them to retire together and look back and enjoy the good old days.

"I believe the best moment will arrive when we three retire together; sit back, rest and reflect about what we've accomplished and what we've learned," Shakib said in a 24-minute interview.

"I think we've played together in the Under-15. Since then, we've been together and probably we'll stay together for a few years. And then we can sit back and talk about what we've done for Bangladesh cricket, "he added.

Shakib, who is currently serving the ban imposed by the ICC, said that the next ICC World Cup in 2023 would be crucial to the trio.

“But for now I think we can look forward and think about 2023 World Cup which will be very important for Bangladesh cricket and for us. So time for us to look forward, at least for now and after a few years we can look back and think what we have done,” he concluded.