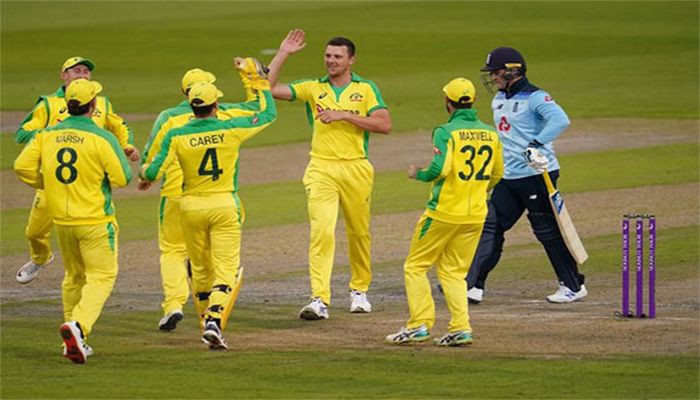 Hazlewood hit England for the third time in 14 ODIs twice early during a miserable 3-26 haul from his full 10 overs as Australia beat arch-rivals, reports AFP.

And they were 57-4 when leg-spinner Adam Zampa struck twice on his way to 4-55 in fast succession.

But Sam Billings, one of only two members of the England side who hadn't played in last year's World Cup final, hit 118 — his maiden ODI hundred — after sharing a fifth-wicket stand of 113 with Jonny Bairstow (84) that gave the hosts hope of an unlikely victory.

Earlier Australia, having made 294-9 in their first match against England at this stage since a semi-final defeat in the World Cup last year.

They were in trouble at 123-5 before a stand of 126 between all-rounders Glenn Maxwell (77) and Mitchell Marsh (73) gave their bowlers enough runs to defend as they went 1-0 up in a three-match series.

"Marsh and Maxwell paced their partnership really well -- they timed when to attack and when to soak up pressure and played two smart, mature innings," Australia captain Aaron Finch told Sky Sports.

Hazlewood match player added: "With the new ball there was a little and we made the most of it."

England opener Jason Roy was beautifully trapped and bowled one-handed by Hazlewood for three, fitting again after a side injury, before the fast bowler trapped Test Captain Joe Root for one.

Zampa then removed Morgan (23) and dangerman Jos Buttler in quick succession, the latter to a fine running catch by Marnus Labuschagne.

But Bairstow hung in to complete a fifty, 78-ball.

But the opener mistimed a drive off Zampa after upping the pace, and was well caught by Hazlewood, running in from wide long-on.

England, with all-rounder Ben Stokes still on compassionate leave in New Zealand with his ill father, was not out of the game entirely.

Having 'ramped' a boundary off left-arm fast bowler Mitchell Starc, Billings pulled a four off Pat Cummins to complete a 101-ball hundred at the start of the penultimate over.

But a goal of 28 off the last over, from Mitchell Marsh, proved too much and Billings was dismissed from the game's last ball, having overtaken his previous ODI best of 67 not out against Ireland in July at Southampton.

Morgan praised Billings, 29, for maintaining the "energy" to press for a place despite making just 19 ODI appearances in a quinquennial career in England.

"To come in and have his maiden hundred here is outstanding," said Morgan. "It shows a lot of resilience and a lot of character."

Quick bowlers Jofra Archer and Mark Wood have taken three wickets apiece in their first one-day international since last year's World Cup final, with Australia in trouble at 123-5 after losing the toss on a blustery afternoon.

Archer, who bowled the decisive Super Over in England's dramatic World Cup final win over New Zealand at Lord's, clean bowled dynamic opener David Warner for just six on his way to figures of 3-57 and Wood's 3-54 saw him strike first ball when Finch edged behind.

Australia was without Steve Smith who was hit on Thursday's head batting in the nets but Marcus Stoinis, filling in at number three, made 43 before being well caught off Wood by diving wicketkeeper Buttler.

The series continues on Sunday, at Old Trafford.