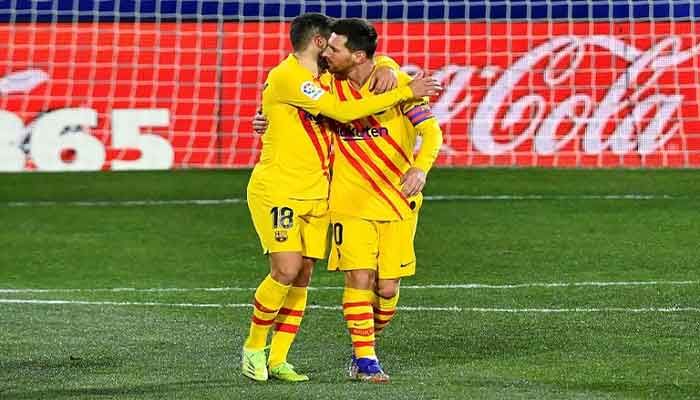 On Sunday, Barcelona won 1-0 at the bottom of Huesca as Lionel Messi became the first foreigner to make 500 appearances in Spain's La Liga, while a late Luis Suarez goal secured the Atletico Madrid leaders' victory over Alaves.

After missing the final game of 2020 with an ankle injury, Messi returned for Barca and swung in a cross for Frenkie de Jong to divert home on 27 minutes for the only goal, reports AFP.

Although the side of Ronald Koeman started a potentially season-defining run of four consecutive away matches with a comfortable victory, they remain a distant 10 points behind Atletico in fifth, having played one more game.

“In general, aside from the last 20 minutes we played well,” said Koeman.

“We created a lot of danger, which isn’t easy against a team that shuts up at the back. We got a great goal and we had two or three more chances to pull away.”

Barca dominated possession and created a number of chances, but several fine saves were made by Huesca goalkeeper Alvaro Fernandez to hold the hosts in touch.

Messi was denied a second just before half-time after De Jong's opener, as Fernandez superbly clawed away his free-kick heading towards the top corner.

The Argentine was again thwarted by the legs of Fernandez in the second half after combining well with Pedri, moments after Marc-Andre ter Stegen reacted sharply to keep out Rafa Mir’s inventive back-heel.

That was a rare threat from Huesca who have now won just once in 17 tries this season but had taken points off most visitors to their Estadio El Alcoraz so far, including Atletico in September.

“We came out strong and very concentrated. It’s the main base we need. If we have that, we improve a lot with the ball and if we get better in front of goal then we can have a very good start to the year,” added Koeman.

Earlier in the day, when they beat 10-man Alaves 2-1 to climb back above Real Madrid at the top, Suarez hit a 90th-minute Atletico winner.

With a deflected strike from just outside the area, Marcos Llorente gave Atletico the lead at Mendizorroza shortly before half-time.

Diego Simeone’s side appeared to have the game under control when Alaves defender Victor Laguardia was sent off on the hour following a VAR review for chopping down Thomas Lemar as the Frenchman ran towards goal.

Florian Lejeune headed against the post for Alaves before a spectacular own goal on 84 minutes from Felipe threatened to cost Atletico two vital points, the Brazilian centre-back drilling beyond Jan Oblak as he attempted to hack clear an attempted cross.

However, Suarez secured Atletico’s fourth consecutive win in the final minute as the Uruguayan tapped in from close range after the ball was slotted across goal by substitute Joao Felix.

“The best thing is how the team finished, not getting nervous, just playing. And the goal was a great goal,” said Simeone.

Atletico climbed two points clear of Real Madrid and have two games in hand on the defending champions.

“The takeaway from this is to continue on the same path,” added Simeone.

After they could only manage a 1-1 draw at home to battling Osasuna, Real Sociedad lost more ground on the top two, though teenager Bryan Gil scored both goals in Eibar's 2-0 defeat of Granada.