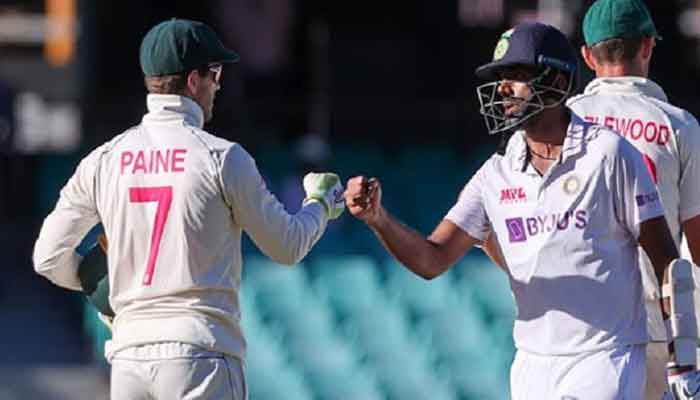 Australian captain Tim Paine apologized to India's Ravi Ashwin at the Sydney Test on Tuesday, admitting that he was "bitterly disappointed" in his own conduct.

On Monday, when he tried to unsettle Ashwin, who played a key role as the tourists denied Australia a draw on the final day of the third test, Paine said anger got the better of him, reports AFP.

"I want to apologise for the way I went about things yesterday... my leadership wasn't good enough, I let the pressure of the game get to me," the Australian skipper told reporters.

Stump microphones picked up Paine making a series of verbal jabs at Ashwin, including calling him a "dickhead".

But the tail-ender was defiant and, starting on Friday, his unbeaten 39 helped retain the series level at 1-1 to set up a winner-takes-all fourth and final test in Brisbane.

Paine admitted that his actions compromised the target he set himself when named Test captain in 2018 after the "Sandpaper-gate" ball-tampering controversy to revamp the toxic culture of the squad.

"I'm a captain who wants to enjoy the game, who wants to play the game with a smile on his face and I fell short of my expectations and our team standards," he said.

Paine, who was also fined for dissent after an expletive-laden rant against umpire Paul Wilson on day two of the match, acknowledged that "my mood throughout the whole Test was probably a bit off"

He insisted that the conduct was a "blip" that would not be repeated and said that he did not consider stepping down over the incident as captain.

Critics, including former England captain Michael Vaughan, said Australia appeared to be heading "back to the old days" of sledging and foul language.

Star batsman Steve Smith, who was Australia's captain during the sandpaper cheating scandal, also attracted negative attention when footage suggested he scuffed up batsman Rishabh Pant's guard at the crease.

The stump camera showed Smith shadow batting and then apparently rubbing off the pitch marks -- made by the batsmen to judge where they stand -- with his boots.

Paine said it was just part of Smith's regular routine.

"It's one of his mannerisms, he was marking centre, he wasn't by any stretch of the imagination trying to change guard or do anything like that," he said.

Paine dropped three catches during the epic final day, including a chance from Ashwin shortly after their exchange, which did not help his mood.

"I ended up looking the fool didn't I? You open your mouth and then you drop a catch," he said.

He said he spoke to Ashwin after the match and they joked about the mistake.