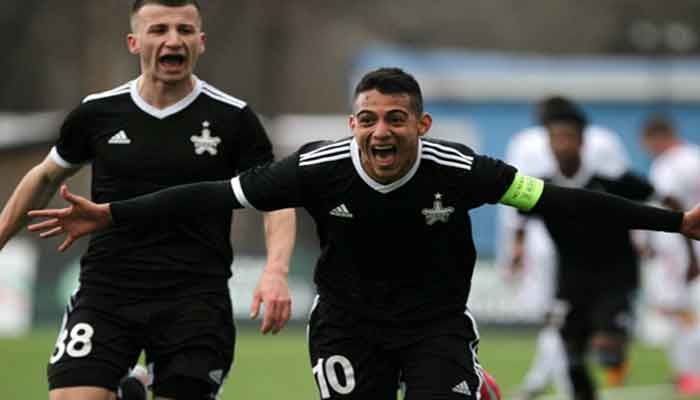 It is the dream of many aspiring South American footballers to make it in Europe. But rather than the bright lights of La Liga, the Premier League or Serie A, Colombia’s Frank Castaneda has come to Moldova to make his name, scoring 21 goals in 30 games for the country’s leading side Sheriff Tiraspol.

Now 26, Castaneda left his homeland in 2018 to sign for Slovakian side FK Senica, reports AFP.

In January 2020 he swapped Slovakia for Moldova, a league ranked as the 45th best in Europe by UEFA but where he is now flourishing.

Forget Luis Muriel or Duvan Zapata, starring for Atalanta in Serie A, or Alfredo Morelos at Scottish champions Rangers, Castaneda is the only Colombian top scorer in any European top flight.

“I dream of playing in one of the big leagues and I am waiting for a big European club to come and look at me,” he tells AFP.

“I am also dreaming of being called up by Colombia or playing at the Copa America. I am just waiting and working hard to see where I might get to.”

Castaneda played for Orsomarso, a second-tier side in Colombia, before moving to Slovakia but it is in remote Moldova, one of Europe’s poorest countries, that he seems to have found the glory he was looking for.

His 21 goals mean he is miles clear atop the scoring charts and have contributed to putting Sheriff on the brink of yet another title in a competition they have dominated for two decades.

Castaneda has become an idol for supporters in the city of Tiraspol, which is the capital of Transnistria, a pro-Russian breakaway state straddling Moldova’s eastern frontier with Ukraine.

“Transnistria has its own border and a different currency to the rest of Moldova, but in footballing terms it’s totally normal,” Castaneda says.

“Whenever we travel to play we have to cross a border, but there are no problems. When we play away we get a good reception because the club is well respected.”

Castaneda is happy, his success now in contrast to a previous failed attempt to win a deal at Argentine side Arsenal de Sarandi.

“My agent didn’t really have a grip on what documents I needed. They were unable to register me and I had to leave,” he says.

“Things went well in Senica. Obviously it was hard at first because of the climate and the language but I was warmly welcomed.”

The performances of the pocket-sized forward, who stands just 1.71m tall, meant clubs inside and beyond Slovakia started taking notice.

“I had a good second season in Slovakia. Other clubs there showed an interest and I also had offers from places like Poland and Colombia, but the offer from Sheriff caught my eye because they were in the Champions League.

“That was a dream for me, even if it was just the qualifying rounds.

“They offered me a decent salary too and here I am.”

Sheriff beat Fola Esch of Luxembourg in the first qualifying round of the Champions League before losing to Qarabag of Azerbaijan despite Castaneda scoring.

But no matter, Castaneda is now on the brink of his first major title.

“I am very happy, not just because we are about to win the league, but because I am the top scorer, and now I’m the captain.

“It is a dream I have been working towards for years. A lot of people who don’t know anything about this league will think it’s easy, but it is not.

“I am fast, skillful and hungry for goals. My stature has not got in my way because I think what matters most is your footballing ability.”

His performances for Sheriff have pricked up interest elsewhere. He has eight months left on his contract and Castaneda is hoping to do enough to draw attention from bigger leagues.

“I am waiting for the right offer to come along.”