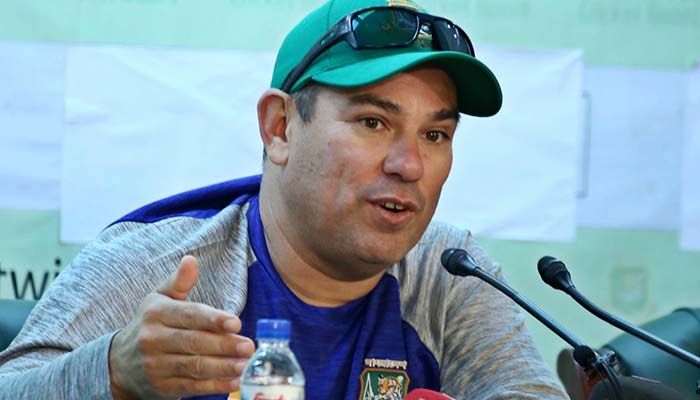 Bangladesh head coach Russell Domingo stressed the necessities of playing well for full five days of a Test match, not the four days which his side has been playing for the last couple of years and eventually conceding defeat from a position of strength, reports BSS.

Of late, Bangladesh lost three Tests from winning position, one against Pakistan and West Indies at home and one against South Africa at away. On three occasions, Bangladesh played extremely well for four days to raise the hope of a victory but one bad session on day five cost them the game dearly.

And after losing the first Test from a good position, Bangladesh lost the momentum in the second Test and performed badly.

Reminding those incidents, Domingo said only playing well for full five days could guarantee a victory in Test cricket and that is what Bangladesh should do if they want to win a Test series against Sri Lanka.

The first of the two-match Test series starts on Sunday at Zahur Ahmed Chowdhury Stadium in Chattogram.

"Against Pakistan we were 200 ahead and then we lost wickets. Against the West Indies, we probably should have won the (Chattogram) Test when they chased down 395. We won the Test in New Zealand. We played really well in the first four days in the Durban Test," Domingo said today.

"The challenge is to sustain that in the second Test. I definitely think we have the ability to beat any side if we play really well for the full five days. Not for four days."

He went on to saying: "When we have a bad session, we have a really bad session. If we lose one or two wickets, we can't lose five. It is something we are trying to address all the time. We are trying to stay calm in the dressing room, so that the batsmen stop the rot."

According to Domingo, Bangladesh still are in good shape in Test cricket, contrary to what the people said. All they need to do to gain the patience to play well for 10 days for two Test matches.

"As Jamie (Siddons) said, there was some really good stuff in South Africa. The last two innings wasn't very good. But guys found conditions tough to bat every time. Last couple of overs of the day when light wasn't good. South Africa had a fantastic spin attack that bowled well in helpful conditions. I don't think it will have much bearing on this series. It was a month ago. It is done. We have moved on," he reminded.

"I just told the bowlers this morning that we got 36 wickets in two Tests in South Africa. I don't think Bangladesh has got that many wickets (in a series). We are confident that we can take 20 wickets. We need to have five bowling options. We have been short in that particular department when Shakib doesn't play. Someone who can bowl those 12-13 overs a day, which is so important."

While Bangladesh struggled against spinners in South Africa, they also didn't get enough from Mushfiqur Rahim, who was senior most and probably the most accomplished batter, the country has ever produced.

Some of the times, Mushfiqur got out in nasty way, trying to reverse sweep, which generated lot of criticism. Domingo said even though Mushfiqur is a fantastic player of this shot, he should play this after getting set.

At the same time, he explained why Bangladesh batters struggled against South African left-arm spinners, despite playing much spin back in country. He also hoped that Bangladesh won't struggle against Sri Lankan spinners as the wicket here is totally different from South Africa.

"I think because the wickets don't bounce as much in Bangladesh. They don't struggle against left-arm spin, but they struggle against bounce that spinners away from Bangladesh get. Generally the wickets stay down in Bangladesh, so they get lbw and bowleds. In foreign conditions the ball spins and maybe get bat-pads and caught in the slips. That's the difference: just staying on top of the bounce than what they are used to."