Double Wins for Rublev to Reach Semis at Rainy Washington 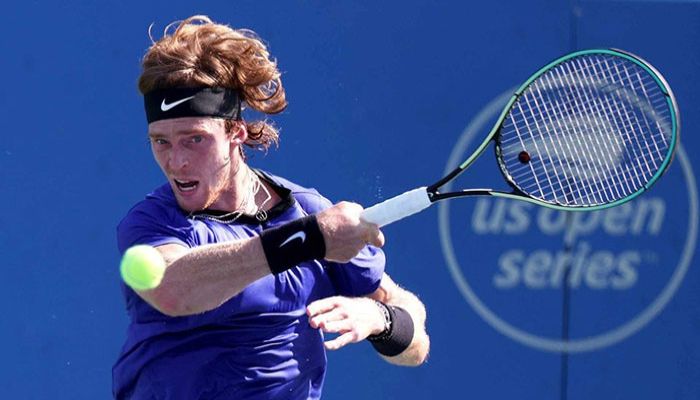 Top seed Andrey Rublev won twice on Friday to reach the semi-finals of the ATP and WTA Washington Open, dispatching Americans Maxime Cressy and J.J. Wolf in the US Open tuneup, reports AFP.

Rain Thursday night forced double duty upon Rublev and several others Friday but more storms provided everyone a major rest break between matches.

Rublev rolled through the first set against Wolf in 28 minutes. Wolf, who ousted Danish ninth seed Holger Rune earlier, denied three break points to open the second set but double faulted to surrender a break in the third game and Rublev cruised from there.

Nishioka, who spent more time on the court in one match than Rublev did in two, improved to 5-0 all-time against the 40th-ranked Englishman in the rain-interrupted affair.

Rublev seeks his fourth title of the season after Marseille, Dubai and Belgrade to match Rafael Nadal and Carlos Alcaraz for the most ATP trophies this year.

Kyrgios, Tiafoe and Korda finished off triumphs early Friday in matches that were halted by Thursday storms.

Estonia's Kaia Kanepi defeated Anna Kalinskaya 6-7 (4/7), 6-4, 6-3 in the only quarter-final completed before the rain delay.

"I don't know how I actually managed to win," Kanepi said. "It was a very tough match. It was so hot."

Kanepi, her age and world rank at 37, seeks her fifth career WTA title but first since the 2013 Brussels Open. Her only hardcourt title came at Brisbane in 2012.

She next faces 88th-ranked Australian Daria Saville, who beat Canadian qualifier Rebecca Marino 6-1, 7-5 in a storm-halted match to reach her first semi-final since 2018 at Acapulco.

But her double-win bid was spoiled by 21-year-old Chinese lucky loser Wang Xiyu, a 95th-ranked left-hander who reached her first WTA semi-final in June at Valencia.

Next up for Wang will be the winner of the quarter-final between 10th-ranked reigning US Open champion Emma Raducanu, the 19-year-old British second seed seeking her first semi-final since her epic title run, and 60th-ranked Liudmila Samsonova.