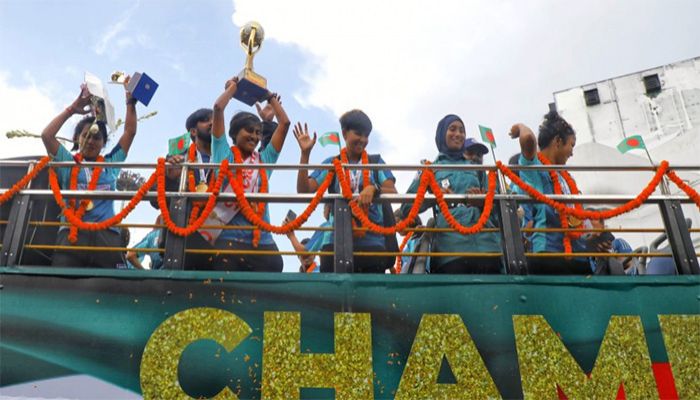 Bangladesh captain Sabina Khatun (2nd-L) holds the SAFF Women’s Championship trophy in an open-top bus on their way to the BFF House from the Hazrat Shahjalal International Airport on Wednesday || Photo: Collected

﻿Bangladesh captain Sabina Khatun dedicated the SAFF Women's Championship trophy to the people of the nation during an impromptu press conference at the Hazrat Shahjalal International Airport upon their arrival from Kathmandu on Wednesday afternoon.

The airport was abuzz with inquisitive media personnel as well as football fans and people in general, who thronged there to get a glimpse of the players.

Sabina, who emerged as the tournament's top scorer and the most valuable player, said: "We feel proud to see that people of the country love us so much. We are indebted to everyone for receiving us in such a grand manner."

"This trophy is for all the people of the country, be it 16 crore, 18 crore or 20 crore. We have done a good result. Now our target to do better in coming days," she said.

The team later boarded an open-top bus which will parade through the streets of Dhaka before reaching the Bangladesh Football Federation House in Motijheel, where there will be a reception accorded to the team by the BFF president Kazi Salahuddin.

Women footballers on the open-top bus

Sabina expressed her gratitude to BFF and the BFF boss.

"There has been a lot of work done on women's football since 2012. This success is a result of the hard work that has been put in the last five-six years. The biggest contributor to this success is Bangladesh Football Federation and its president Kazi Salahuddin," said Sabina._Agencies