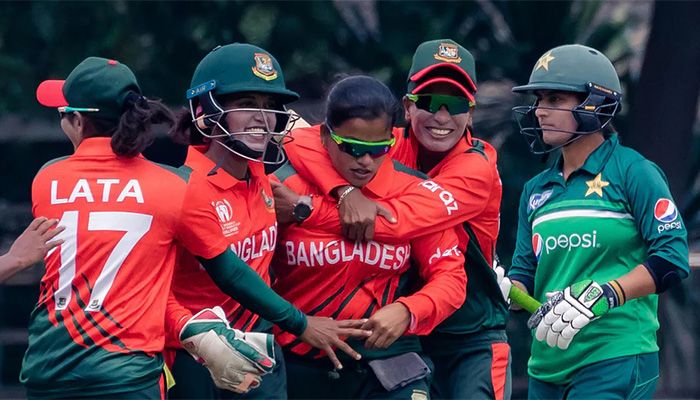 Players of Bangladesh women’s team celebrate during in their first match of the Women’s World Cup qualifier against Pakistan at the Old Hararians Ground in Harare, Zimbabwe on 21 November 2021 || File Photo

﻿﻿Bangladesh Women team became unbeaten champions at the ICC Women's Qualifying Group A to reach the semifinal on Wednesday.

Bangladesh beat USA by 55 runs at the Sheikh Zayed Stadium, Abu Dhabi to clinch their third win in the group after beating Scotland and Ireland in their previous matches.

Bangladeshi opener Murshida Khatun scored 77 off 64 and skipper Nigar Sultana added 56 off 40 as their unbeaten second wicket stand of 138 runs saw them post 158 runs on the board.

Chasing the stiff target, US skipper Sindhu Sriharsha made 74 off 71 but her side ended with mere 103 losing three wickets.

Bangladesh will now play the semifinal and winning that would ensure their berth in the next year's T20 World Cup scheduled to take place at the South Africa._Agencies