Money, Cloths Missing from the Luggage of SAFF Winning Footballers 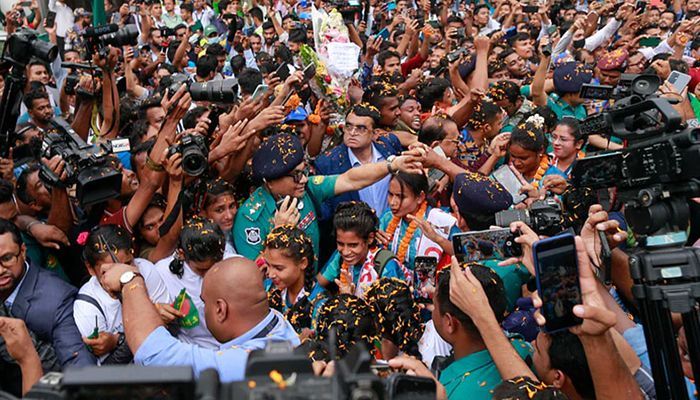 The photo was taken during the reception of the footballers who won the SAFF women's championship at the airport|| Photo: Collected

﻿There have been allegations of missing dollars, clothes, and other accessories from the luggage of SAFF-winning footballers Krishna Rani Sarkar and Shamusnannahar. The incident took place at Hazrat Shahjalal International Airport after returning to Dhaka from Nepal on Wednesday.

Mahbubur Rahman, the assistant coach of the Bangladesh football team, is very disappointed in such an incident, "After landing at the airport, I came to know that Krishna, Shamsunnahar and several belongings of our team's physios are missing. They lost money too. We immediately reported the matter to Kiran Apa (Mahfuza Akhtar, Bangladesh Football Federation Women's Wing Chairman). Apa has already contacted the Bangladesh Civil Aviation Authority. Hopefully, there will be a solution in this regard."

After leaving the airport, the players were brought to the BFF building in an open-top bus. But after learning about the theft, the girls' festive mood faded.

After the successful footballers landed at the airport yesterday, an extremely chaotic situation was created. Many people were waiting outside the airport since morning.

Hundreds of cameras and reporters crowded the airport's VIP lounge. There was a crowd of journalists on the road where the female footballers were supposed to come after immigration. Due to which the press conference was also cancelled. The girls got into the open-top bus.

Sabina and Krishna's luggage were lying on one side of the airport baggage belt. A few officials who were there yesterday were saying, "Whose are these luggages?" Why isn't anyone taking it?' After that, BFF collected the girls' luggage. But some of the players found their luggage locks broken when they went to the BFF building."