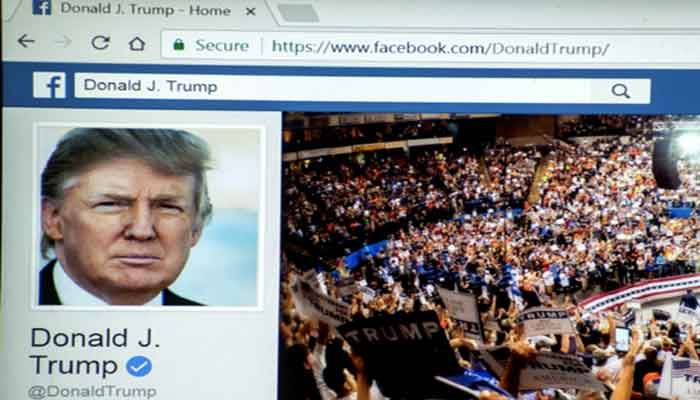 Facebook banned President Donald Trump from the platform "indefinitely" because of his efforts to incite violence in the US capital this week, Chief Executive Mark Zuckerberg said Thursday reports the Hindustan Times.

Zuckerberg said the 24-hour ban announced Wednesday was extended because of Trump’s “use of our platform to incite violent insurrection against a democratically elected government.”

The announcement came the day after the outgoing U.S. leader was locked out of all major social media platforms due to his false claims about the legitimacy of his loss to President-elect Joe Biden and his incitement to the angry mob that stormed the U.S. Capitol.

His favourite megaphone, Twitter, had been blocking him for 12 hours, but it wasn't clear on Thursday that the ban had been lifted.

Snapchat confirmed Thursday that it locked Trump out of the photo sharing platform amid concerns over his dangerous rhetoric.

“We believe the risks of allowing the President to continue to use our service during this period are simply too great,” Zuckerberg wrote on his Facebook page.

“Therefore, we are extending the block we have placed on his Facebook and Instagram accounts indefinitely and for at least the next two weeks until the peaceful transition of power is complete.”

The crackdown came after Trump's supporters stormed the U.S. Capitol on Wednesday in an unprecedented attack that resulted in one woman being shot and killed by the police, interrupting the usual ceremonial procedure to certify Biden's election victory.

Trump, who had addressed the mob and urged them to march on the Capitol, later released a video on social media in which he repeated the false claim of election fraud -- even telling the mob “I love you.”

Twitter said Trump’s messages were violations of the platform’s rules on civic integrity and that any future violations “will result in permanent suspension of the @realDonaldTrump account.”

The messaging platform said Trump’s account would be locked for 12 hours and that if the offending tweets were not removed, “the account will remain locked.”