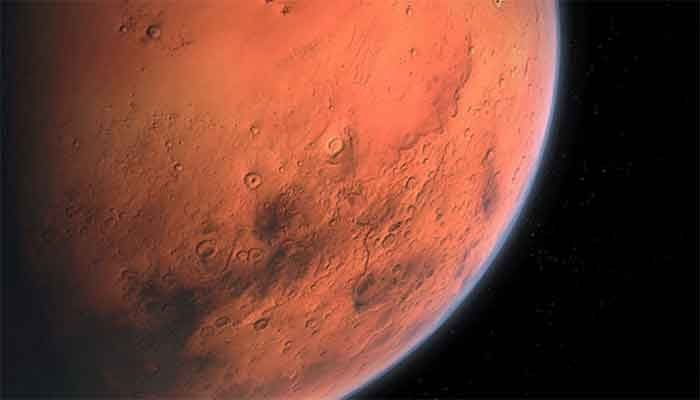 NASA's Perseverance rover survived a nail-biting landing process after seven months in space to gently touch down on the surface of Mars on Thursday, ready to embark on its quest to look for signs of ancient microbial existence.

The autonomously guided procedure was completed more than 11 minutes earlier, which is how long it takes for radio signals to return to Earth.

"Today proved once again that with the power of science and American ingenuity, nothing is beyond the realm of possibility," he tweeted.

Perseverance would attempt to collect 30 rock and soil samples in sealed tubes over the course of several years, to be ultimately sent back to Earth for lab study sometime in the 2030s.

It weighs a ton about the size of an SUV, is fitted with a robotic arm seven feet (two meters) long, has 19 cameras, two microphones, and a suite of cutting-edge instruments to help achieve its scientific goals.

Before it could embark on its lofty search, it first had to resolve the infamous "seven minutes of terror" — the dangerous landing technique that has scuppered nearly 50 percent of all missions to the earth.

It then deployed a supersonic parachute the size of a Little League field, before firing up an eight-engined jetpack to slow its descent even further, and then eventually lower the rover carefully to the ground on a set of cables.

But the vessel had new landing technologies up its sleeve to help it navigate during descent, including the "Terrain Relative Navigation" that uses a special camera to identify surface features and compare them to an onboard map.

Scientists believe that around 3.5 billion years ago the crater was home to a river that flowed into a lake, depositing sediment in a fan-shaped delta.

"The question of whether there's life beyond Earth is one of the most fundamental and essential questions we can ask," said NASA geologist Katie Stack Morgan.

"Our ability to ask this question and develop the scientific investigations and technology to answer it is one of the things that make us as a species so unique."

In summer, it will begin digging its first samples, and its engineers have intended to traverse the delta first, then the ancient shore of the lake, and finally the crater's edges.

The peak speed of 0.1 miles per hour of Perseverance is slow by Earth standards but quicker than any of its predecessors, and can deploy new instruments to search for organic matter, chart chemical composition, and zap rocks to analyze the vapor with a laser along the way.

"We astrobiologists have been dreaming about this mission for decades," said Mary Voytek, head of NASA's astrobiology program.

Despite the state-of-the-art technology of the rover, it remains crucial to carry samples back to Earth because of expected ambiguities in the specimens it records.

Fossils that originated from ancient microbes, for example, may look suspiciously similar to precipitation-induced patterns.

Flying on another world

Before getting to the main mission, NASA wants to run several eye-catching experiments.

There is a tiny helicopter drone tucked under Perseverance's belly that will attempt the first powered flight on another planet.

In a demonstration of the idea that could revolutionize the way we reach other worlds, the helicopter, named Creativity, would have to achieve lift in an atmosphere that is one quarter the density of Earth's.

Another experiment involves an instrument that, like a plant, can convert oxygen from the predominantly carbon dioxide atmosphere of Mars, using the electrolysis method to generate 10 grams of oxygen an hour.

The principle is that people would ultimately not need to bring their own oxygen, which is important both for rocket fuel and for breathing.

Meanwhile, after previous attempts failed, Perseverance's two microphones would attempt to capture the Martian soundscape for the very first time.

Just the fifth rover has ever put its wheels down on Mars. In 1997, the feat was first achieved and all of them were American.

That will probably soon change: China's Tianwen-1 spacecraft entered Martian orbit last week and is expected to touch down with a stationary lander and a rover in May.