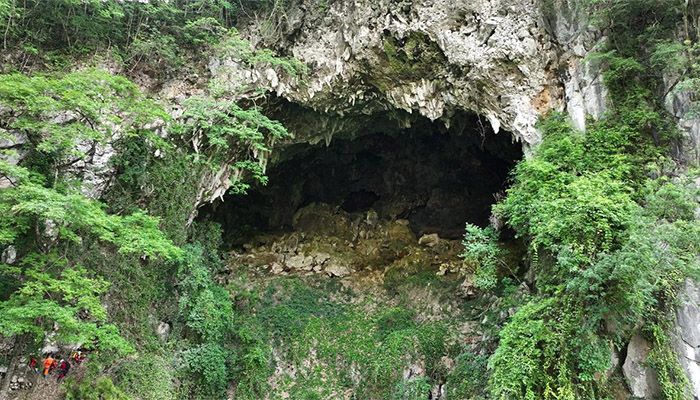 Giant sinkhole in the Guangxi region of China || Photo: Collected

﻿﻿﻿﻿Scientists have found an ancient forest hidden within a giant sinkhole in the Guangxi region of China, which could be home to previously unknown species. It's all vaguely reminiscent of the Hollow Earth from Godzilla vs. Kong... but there's no sign of any kaiju yet.

Cave explorers alerted scientists when they discovered a sinkhole measuring 630ft deep, 1000ft long and 490ft wide, but its size was not the only matter of significance. According to Xinhua News, the prodigious pit was housing a well-preserved primitive forest filled with ancient trees as tall as 130ft, serving as a potential habitat for undiscovered species.

A cave exploration team abseiled down and trekked for several hours to reach the bottom of the sinkhole on May 6. China Global Television Network (CGTN) posted a video on Twitter showing highlights from their expedition to the tree-covered terrain, where they found dense shade plants coming up to their shoulders, and three caves hidden in the walls of the site.

While the enormity of the sinkhole and its cluster of contents may be eye-opening for many, George Veni, the executive director of the National Cave and Karst Research Institute in the U.S., told Live Science the discovery is not as surprising to researchers, as southern China is known for its karst landscapes featuring "dramatic sinkholes and otherworldly caves."

Veni explained that karst landscapes are primarily formed by the dissolution of bedrock, which occurs when the acid concentration in rainwater builds up and collects carbon dioxide. It then drains into the cracks in the bedrock, dissolving the limestone and widening the gaps until, in some cases, the ceiling collapses to create a sinkhole and possible oasis for life.

"I wouldn't be surprised to know that there are species found in these caves that have never been reported or described by science until now," said cave expedition leader Chen Lixin.

The notion of underground worlds has been explored in everything from Shakespeare to classic adventure novels and more recently, Godzilla vs. Kong. The 2021 Monsterverse film plays into the Hollow Earth theory, which posits that the Earth is entirely hollow and in most versions of the legend there are people or creatures living in it.

Some people claim our true Earth is hollow, while others extend this belief by suggesting there is a secondary sun within our planet. The idea has become a staple of science fiction storytelling, and even a popular conspiracy theory.

Craters can occasionally offer a passage to the past. The Chicxulub crater, for instance, marks the impact site of an asteroid that struck Earth 66 million years ago. Scientists determined that the asteroid crashed and created a 90-mile deep hole in the ground, which had such an impact that the resulting effects killed all dinosaurs and 75% of the world's animal species.

For more science news, read about the gates of hell and why they may finally be extinguised after burning continuously since the 1970s, find out how invisible walls in space may help to explain a problem that has been perplexing scientists, as well as how newly-discovered fossils reveal the ways in which ancient dogs differed from our own faithful companions._IGN