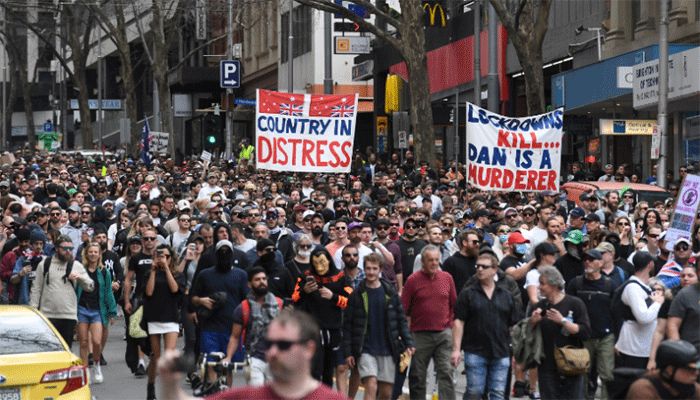 Protesters march through the streets during an anti-lockdown rally in Melbourne on August 21, 2021. || AFP Photo: Collected

Hundreds were arrested after violent clashes between anti-lockdown protesters and police in Australia's two largest cities Saturday as the country recorded its sharpest rise in daily Covid-19 cases since the pandemic began.

Sydney's state of New South Wales posted 825 infections -- a record for the entire country -- a day after authorities extended the city's lockdown until at least September to try to head off the Delta variant, reports AFP.

"No matter how hard we work, no matter if 99 per cent of people are doing the right thing, there's an element of Delta that nobody can control," NSW Premier Gladys Berejiklian told media.

"The best way we can look forward to freedom is by making sure that we get vaccinated."

An increasing outbreak in Melbourne's state of Victoria also prompted stay-at-home orders to be extended across the entire state on Saturday.

But Melbourne's public health orders didn't deter thousands from venting anger in a march against the lockdown rules, with police using pepper spray in violent clashes with protesters.

Seven officers were injured and more than 200 people were arrested in the "violent and unlawful" protest, Victoria Police said in a statement.

"While there were some peaceful protestors in attendance, the majority of those who attended came with violence in mind," they said.

In Sydney more than 1,500 police flooded the city, setting up roadblocks and making dozens of arrests as around 250 gathered there, NSW Police said.

Large crowds were also reported at an anti-lockdown rally in Brisbane.

Sydneysiders were plunged into lockdown in late June, and restrictions now reach across two states and the nation's capital, affecting over 15 million people.

Under a third of Australia's population are fully vaccinated, as the arrival of Delta threatens to unwind the nation's hard-fought pursuit of "covid zero".

After a glacial rollout, nationwide vaccination efforts have accelerated in recent weeks, with leaders setting a target of over 70 per cent vaccination rates before restrictions ease.

Sydney's outbreak has also been linked to a case that sparked a national lockdown in New Zealand.

Australia has recorded over 42,000 cases in a population of over 25 million since the pandemic began, with 974 deaths linked to the virus.