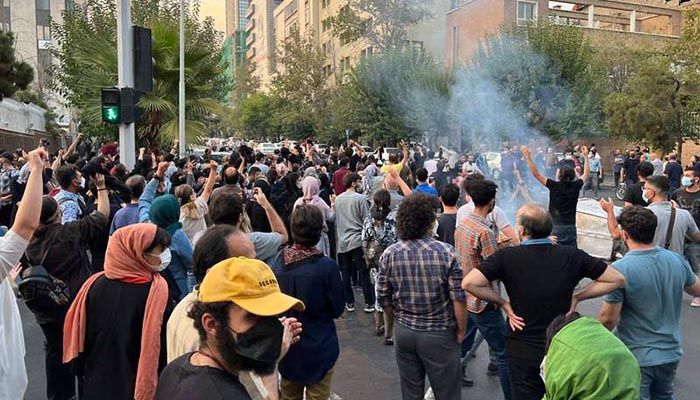 The crowd chanted 'Death to the dictator', meaning Supreme Leader Ayatollah Ali Khamenei, while some women took off their headscarves || Photo: AFP

﻿US President Joe Biden on Wednesday declared support for a growing protest movement that has erupted across Iran in a move that experts noted marked a shift from then-president Barack Obama's response during demonstrations in 2009.

His comments came as violent rallies stretched into a fifth day in cities across Iran, reportedly resulting in the deaths of at least eight protesters, as anger over the death of a woman in morality police custody escalates.

“Today we stand with the brave citizens and women in Iran who right now are demonstrating to secure their basic rights,” Mr Biden said in his address to the UN General Assembly.

The protests began after the death on Friday of Mahsa Amini, 22, whom Iran's morality police had arrested three days earlier for allegedly breaking the country's strict hijab law. Amini, who was from Iran's Kurdistan province, fell into a coma after her arrest.

Protesting women have publicly burnt their hijabs and cut their hair in front of cheering crowds. Some have even chanted “death to the dictator”.

Mr Biden's words of support mark a shift in tactics from when he was Mr Obama's vice president. At that time, and in response to Green Movement popular protests, Mr Biden and his boss kept quiet for more than a week when it came to supporting the demonstrators.

The Obama administration was heavily criticised for the delay in responding to the protests, which came as Washington pursued a fresh start with the Iranian regime and later focused on nuclear talks that culminated in the 2015 Joint Comprehensive Plan of Action (JCPOA).

This time, Mr Biden's administration is being more vocal, even at a critically delicate moment in negotiations with Iran to resume the JCPOA.

On Monday, for instance, Secretary of State Antony Blinken said Amini “should be alive today”.

Ali Vaez, the director of the Iran Project at the International Crisis Group, saw support for protesters as an indication of a two-pronged approach by the administration.

“The US is clearly demonstrating that it can walk and chew gum at the same time: negotiate to curb Iran’s nuclear programme while protesting Iran’s efforts to curb its women’s rights,” Mr Vaez told The National.

Other senior administration officials, including National Security Adviser Jake Sullivan and US Special Envoy for Iran Robert Malley, also condemned Iran over Amini’s death and spoke in support of women demanding their rights.

Mr Vaez expected the administration to follow its pledges of support with penalties directed at Iran if it unleashes a bloody crackdown against protesters similar to what happened in 2009.

“More sanctions against human rights violators and more sanctions relief aimed at ensuring the Iranian people’s access to the free flow of information [will follow],” the expert said.

Holly Dagres, a senior fellow at the Atlantic Council, said more is needed from the Biden team in showing support for the protesters.

“Condemnation from the US president on the international stage is important, but actions speak louder than words,” Ms Dagres told The National.

“How will the international community, particularly the West, hold Iran accountable for the rise in repression in the country?

“From what we've already seen for the past four decades, there are no red lines for the Islamic Republic.”

Still, she saw Mr Biden’s support as both “significant and surprising”, noting that when protests broke out in Iran in May, “it took the State Department over a week to react, all while [the State Department's] Persian-language Instagram account decided to highlight popular fitness franchises like Soul Cycle”.

In Washington, support for the current protests is bipartisan.

The chairmen and ranking members of the Senate Foreign Relations Committee, Democrat Bob Menendez and Republican Jim Risch, both spoke out on Twitter about the protests. Mr Risch called Amini's death a “murder”, while also criticising the Biden administration for continuing to try to negotiate a new nuclear deal with Iran.

Former US ambassador to UN Nikki Haley called the protests on Wednesday “heroic”.

“We have an obligation to tell the Iranian people’s stories,” Ms Haley said at an event at the United Against Nuclear Iran organisation, while urging the Biden administration to sanction human rights abusers in Iran._Agencies